Covina On the Cusp

Title page of the CHS Cardinal yearbook from 1954: the year I was born in Covina. It shows my home town on the cusp of its transition from citrus-growing capital to suburban residential community. 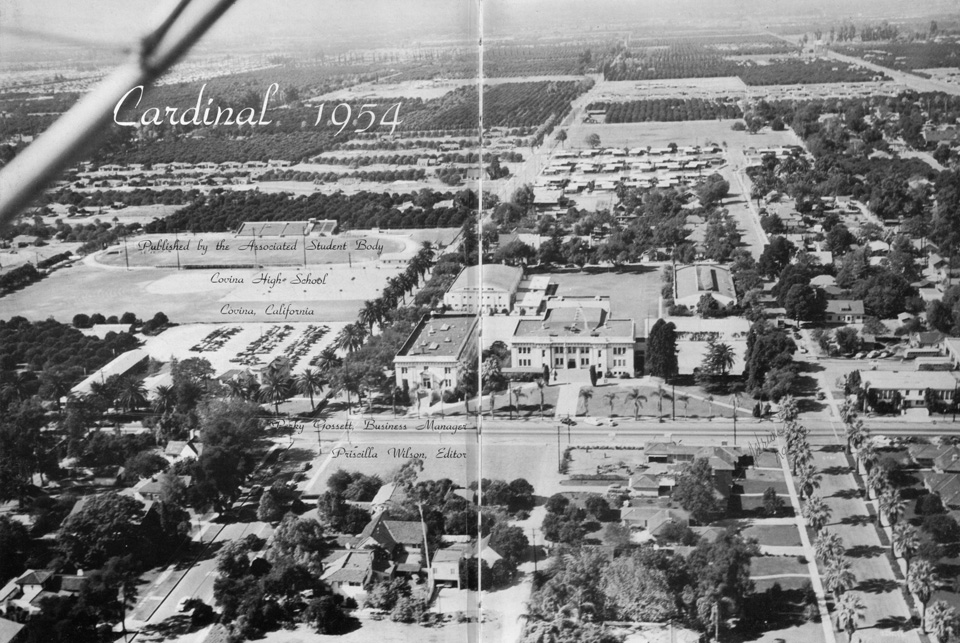 Still more groves than subdivisions at this point, but that wouldn't be the case for much longer.

The old high school would soon be no more, as well. CHS began transitioning to a new location on Puente at Hollenbeck starting in Fall, 1956. That same year, students from West Covina attended classes at the old campus until their own new high school would be ready in 1957. In 1958-1959, it became an all-freshman high school, where students from all over the area waited for Northview, Charter Oak, and Edgewood to be completed. After closing in 1960, both the gymnasium and main building were targets of arson fires, and the entire complex was subsequently demolished.

Excellent video summarizing the history of our home town, originally presented in 1977 by the Rotary Club of Covina, and released on DVD in 2006 by the Covina Valley Historical Society. Historical materials compiled and presented by Vernon Jobe with narration by William B. Temple, and supervised by William Stone.

Among the topics covered are the history of irrigation, the citrus industry, rail transportation, schools, social organizations, postal service, the fire department, early telephone service, civic improvements, and a series of very interesting "before and after" views of Covina and environs over the years. Well worth a watch!

A bright, sunny winter's day on Citrus Avenue in Covina in February of 1938. 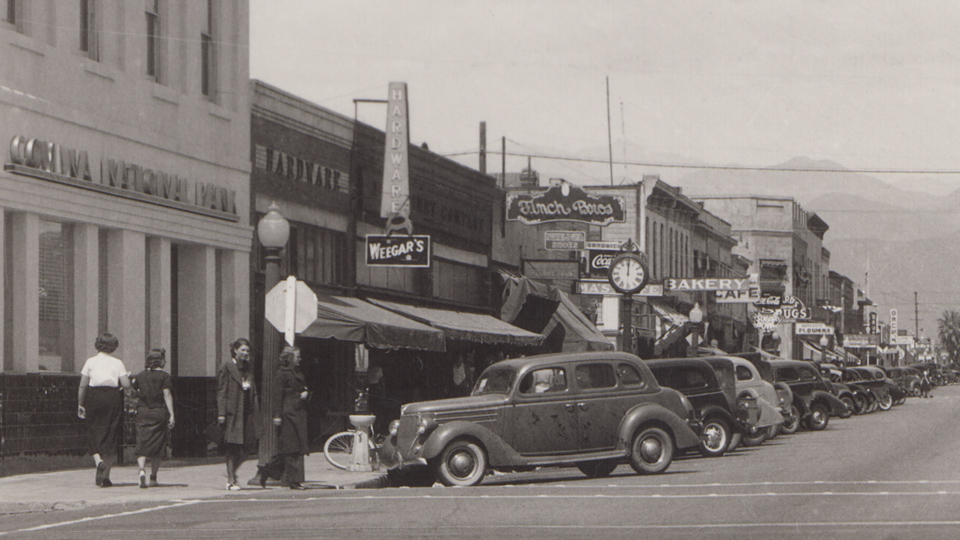 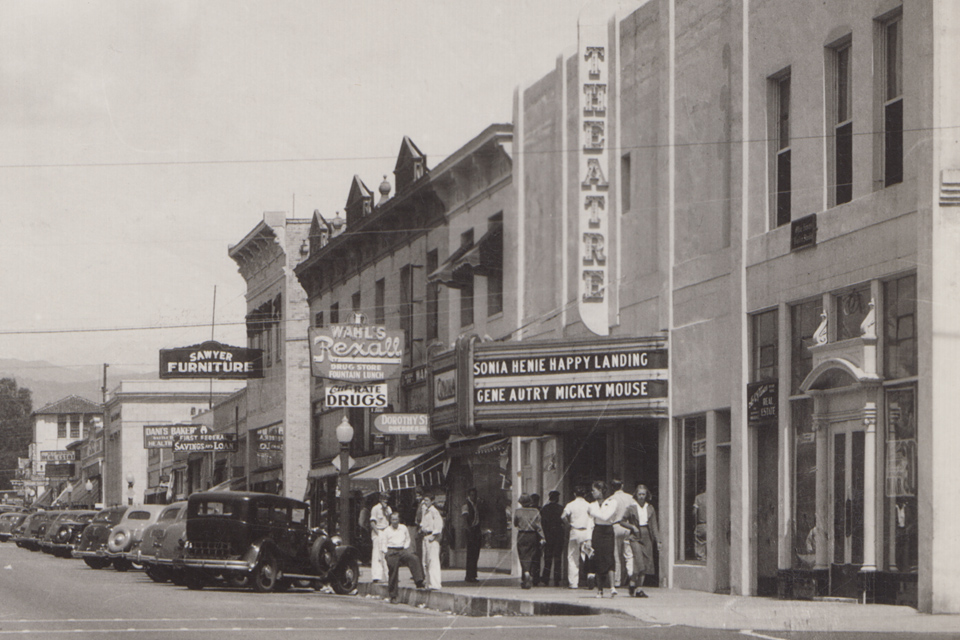 The street clock in front of the Finch Bros. jewelry store reads high noon, and customers look to be filing in to the Covina Theatre for today's matinee. The Reed Block (1900) in which the theater resides sports a brand new art deco facade made of stucco, and both of Covina's old landmark bank buildings on the opposite side of Citrus are slathered with the same modern material, as well. The WCTU drinking fountain still stands on the corner, but with a different pedestal now. Drugs seem to be the most popular retail commodity in town these days, with cafes and bake shops taking place and show respectively.

I recently acquired this Sterling silver souvenir spoon, hand-engraved with 'Covina CAL' on the bowl. I'm told it dates to the 1910s. 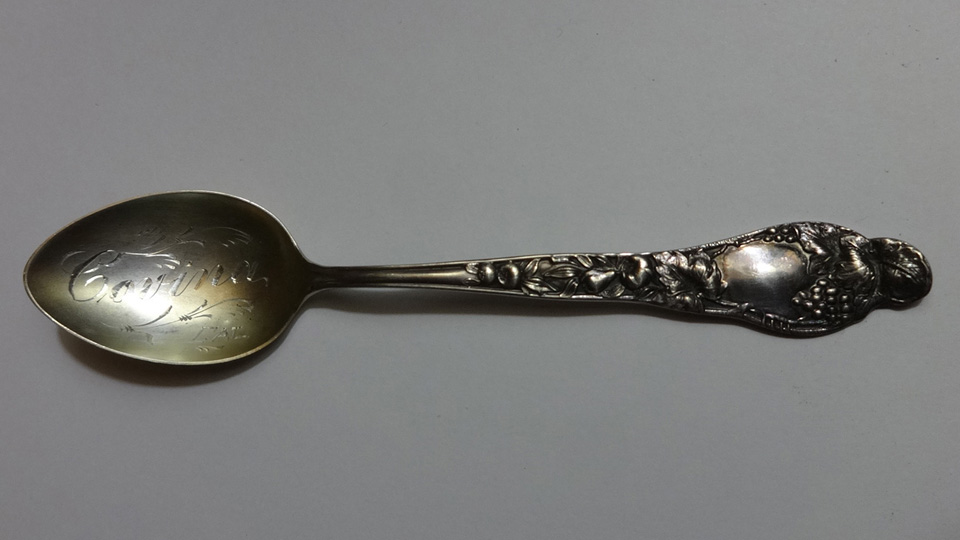 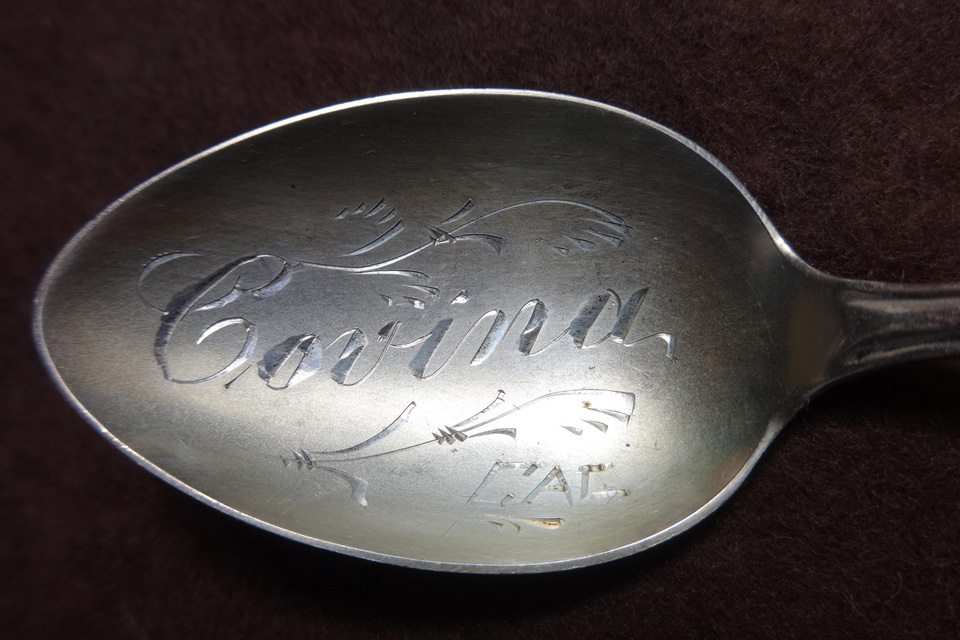 If it is from that period, it might very well have been bought at The Peoples Store on Citrus. This is exactly the kind of knickknack they sold. Clapp's Pharmacy is another possibility. Both carried souvenirs and curios in addition to their regular goods. 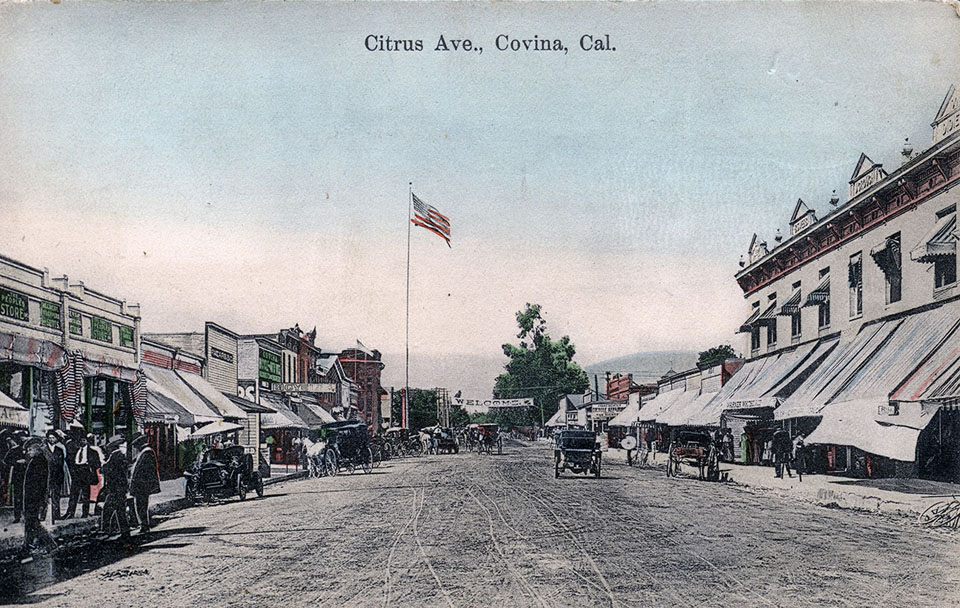 'The Peoples Store' can be seen over at the far left edge.

I was really happy to find the spoon. I saw one just like it 10+ years ago but failed to score it. I think my Covina antique collection is complete now. This was kind of the Holy Grail for me.

San Bernardino Road is one of Los Angeles County's oldest historical highways. An important transportation link in pioneer times, today's city of Covina would not have come into existence without it.

In 1810, when California was still part of the Spanish Empire, the friars of Mission San Gabriel built a ranch outpost 45 miles to the east. The chapel there was dedicated to San Bernardino de Siena, which, in the decades to come, would lend its name to a new city, and to the mission trail that originally connected the inland estancia to the mother church and to Los Angeles beyond.

Detail from the Kirkman Map (1937) of historical sites in Los Angeles County, showing the future location of Covina on the "Old San B[ernar]dino Road" (center).

By 1842, when the San Bernardino Road was established as the northern boundary of Rancho La Puente, it was already the main east-west carriage and coach route through what was then called the Azusa Valley. Recognizing it as an ideal location for a townsite, Joseph S. Phillips bought 2,000 acres of land on the south side of the stage road in 1882, and founded Covina there 3 years later.

Many early "firsts" in the Covina area took place along the much-traveled track. 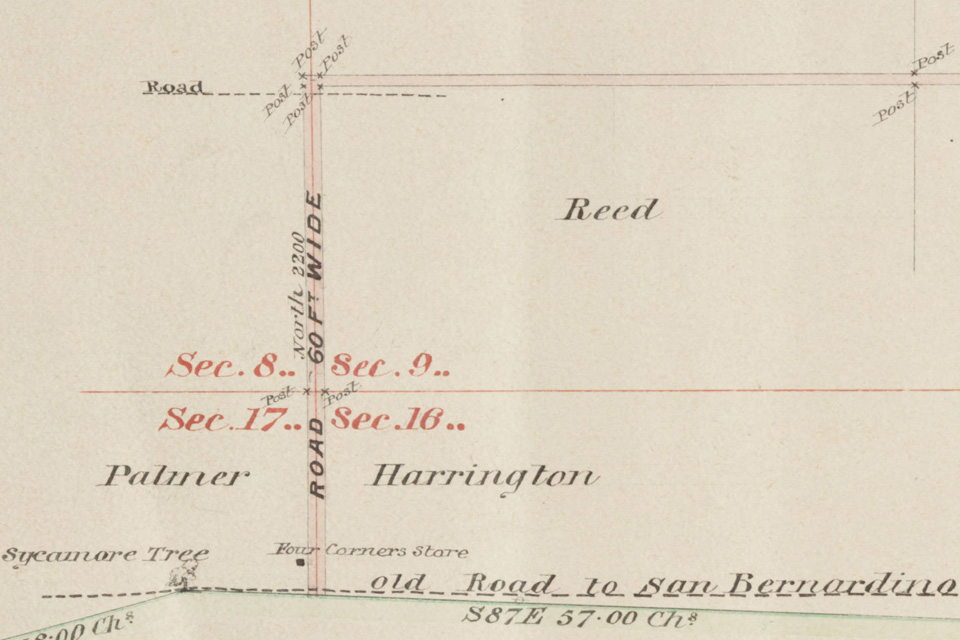 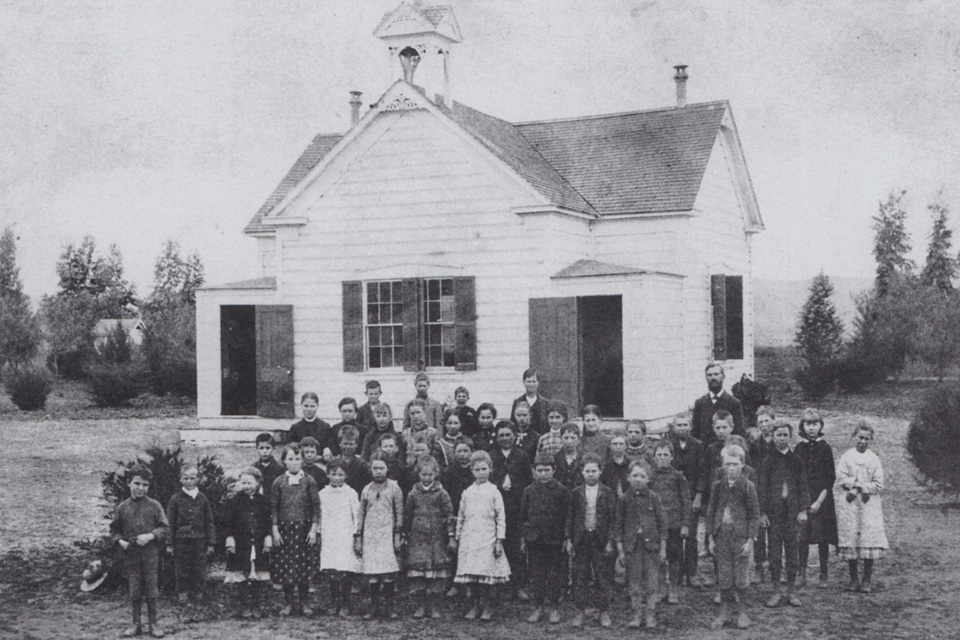 Additionally, some of the earliest houses in the lower Azusa Valley were built along San Bernardino Road. The most historically notable were the homes built by the Badilla brothers in 1876 just west of today's Hollenbeck Avenue, and Thomas S. Ruddock's Mountain View estate, erected in 1886 at San Bernardino Road's intersection with Grand Avenue. 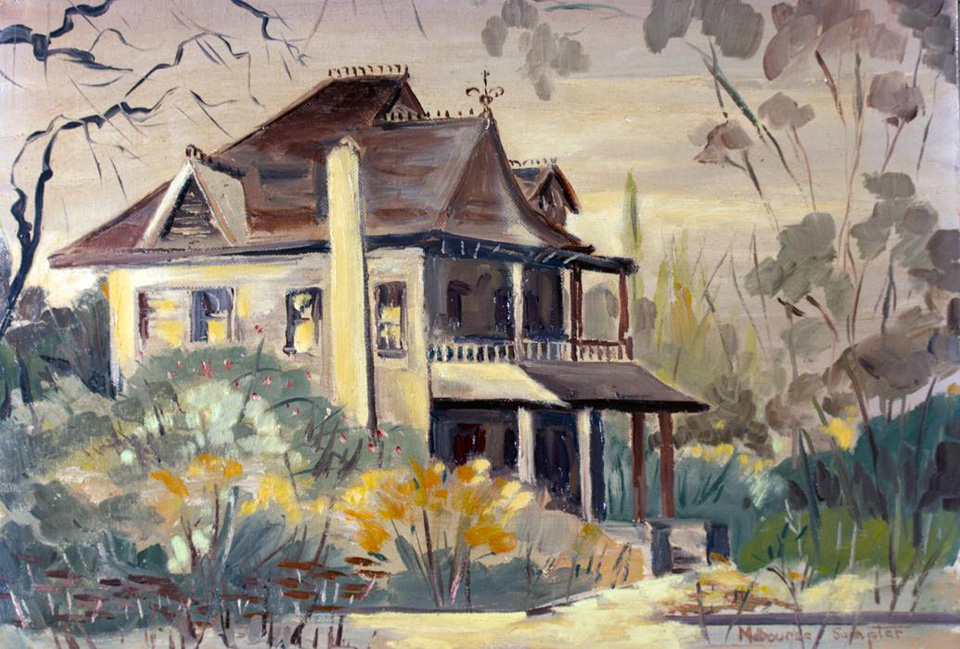 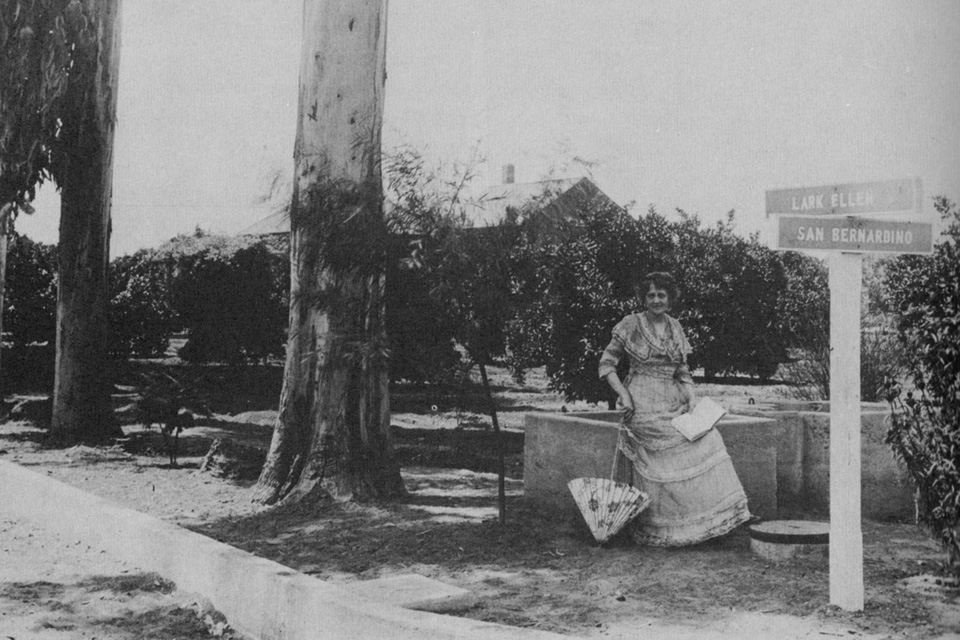 In the new automobile era, San Bernardino Road became the first east/west thoroughfare through the southern portion of the East San Gabriel Valley, and Covina. 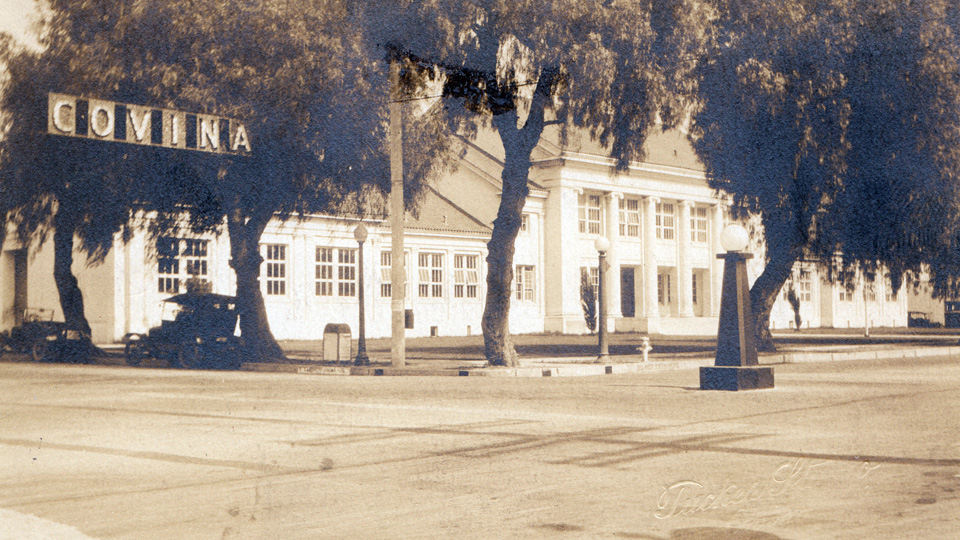 Now over 200 years old, almost all traces of the original San Bernardino Road have been erased, however the portion of it that passes through Covina today is one of the few remaining stretches that precisely follows the track of the historic Spanish mission trail.

The familiar odd angles of old San Bernardino Road are easily recognized in this detail of the first map of Covina, 1885. Courtesy Glenn Reed/Covina Valley Historical Society.
at 7:09 PM 6 comments: 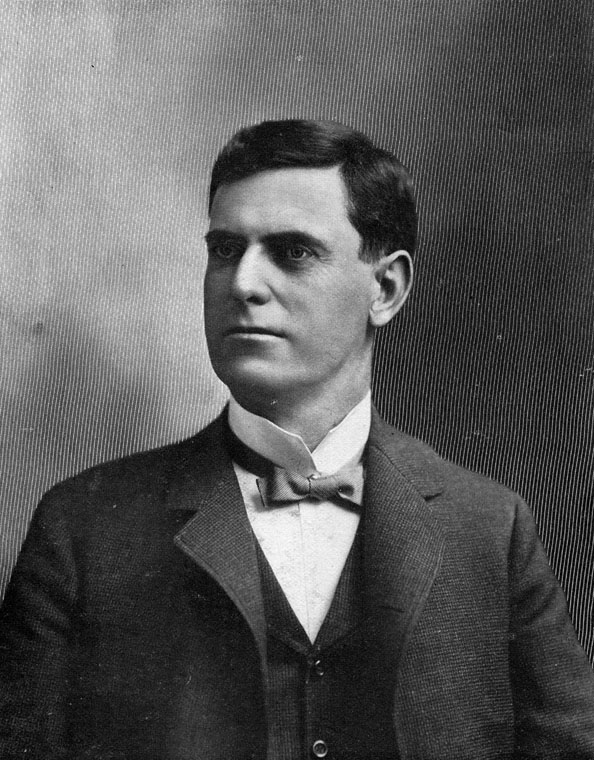 Frederick Eaton (1856-1934), surveyor of the Phillips Tract and the townsite of Covina.
Source: Wikimedia Commons.

A couple of years ago we, of the Historical Society, were surprised and honored by a visit from some of the descendants of the Badilla brothers. As most of you know the Badilla brothers were Costa Rican coffee growers who came to California about 1875 and, with the intention of raising coffee, bought the land where Covina is now not knowing that this area was far too arid for the cultivation of that crop. In 1882, Joseph Swift Phillips purchased most of that land, decided to subdivide it, and established the town of Covina near its center. He hired Fred Eaton to survey the land and lay out the town site. This was completed, the site map was filed, and maps published in 1885. The map had street names written on it, including "Dexter," the name of Phillips's newborn son, and to honor the previous owners, "Badillo" street. But on the map the Costa Ricans' name was spelled Badillo, with a terminal "o" rather than "Badilla" the the last letter "a" as the brothers' name was spelled. 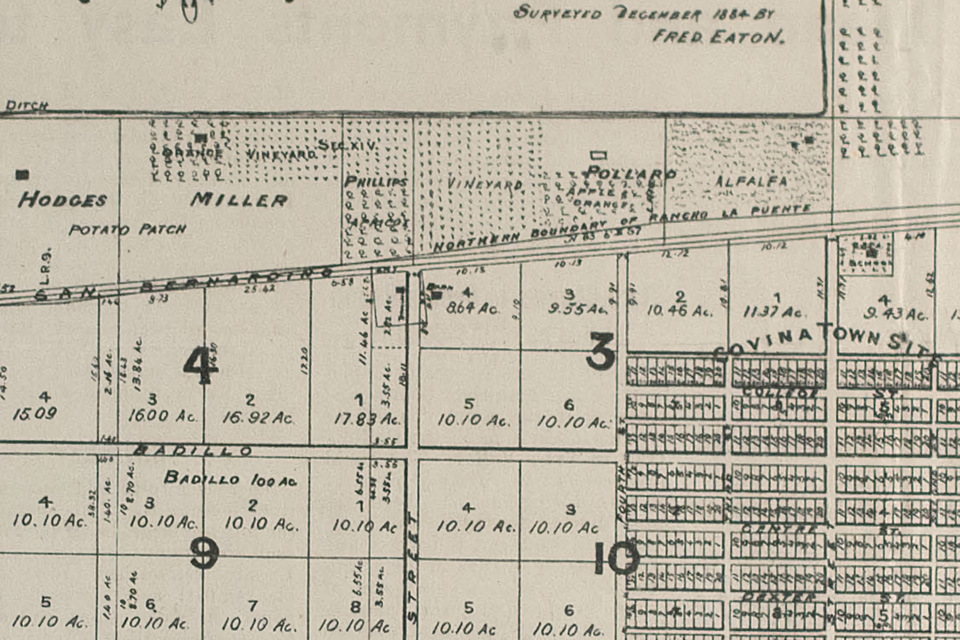 The Badilla descendants pointed the error out, much to our chagrin. Some time later, I noticed an item on Facebook where one of the Badilla descendants suggested that the error was caused by the historical society. This was impossible, of course, as the error occurred in 1885 and the Society was not founded until 1969. But who was responsible for the misspelling? Mr. Phillips? Looking at his cash ledger from 1885-1886, I found more than twenty places where he entered the name Raphael or Vincent Badilla for work they performed on the water ditch from the San Gabriel River. Raphael and Vincent were two of the thirteen children of Antonio Badilla, one of the Costa Rican brothers. There entries were in Joseph Phillips's own hand and the name "Badilla" was written clearly with the "a" as the last letter. So apparently it was not Mr. Phillips as he used the proper spelling. It must have been Fred Eaton or someone in his office. In any event Fred Eaton must bear the responsibility.

Incidentally, Mr. Phillips's Cash Ledger for 1885-1886 is one of the prize treasures of our historical society's collection.

Mr. Fred Eaton made a couple of other mistakes in his lifetime and is remembered more for those than for his many accomplishments. He was born in 1855 in Los Angeles. He became superintendent of the Los Angeles Water Company when he was only 19 years old. Of course his uncle owned the company. Eaton hired William Mulholland as a zanjero and quickly moved him up in the company. Eaton opened his own engineering office in 1881 and did the survey of Covina in 1884-1885. He was appointed city surveyor and then elected city engineer of Los Angeles in 1887 (he was the only candidate).

Eaton designed 6th Street Park (now knwon as Pershing Square), Elysian Park, Westlake Park (now named MacArthur Park), Eastlake Park (now known as Lincoln Park), and the Plaza. His major achievement was the design of a new sewer system for the city of Los Angeles with an outfall to the ocean.

In 1898, he was elected mayor of Los Angeles for a two year term. While mayor he ensured strict enforcement of civil service laws in the city, desegregated the fire department (it was segregated again under the next mayor), created the Los Angeles Water Department, and announced his plan to appoint William Mulholland as superintendent. It was he who convinced William Mulholland that the need for water in Los Angeles could best be satisfied by an aqueduct from the Owens Valley to Los Angeles. For these accomplishments, and many more, he deserves much credit.

But later, acting on behalf of the City of Los Angeles, Eaton bought water rights from Owens Valley land owners while letting them believe that he was an agent for the federal government's reclamation program that was for the farmers' benefit. When it was discovered that he was acting for Los Angeles he was considered a villain and is still remembered for the deception.

Fred Eaton also bought, for his own account, an area called Round Valley near the Owens River. Some years later, after the aqueduct from Owens Valley to Los Angeles had been completed, William Mulholland felt it would be necessary to build a storage reservoir in Round Valley and asked Eaton to sell it to the city. Eaton asked for an amount that Mulholland felt was exorbitant. Their disagreement destroyed a close friendship of 35 years. Mulholland chose instead to build a reservoir on the Santa Clara River behind a new dam – the Saint Francis Dam.

This article was originally published in the October, 2016 issue of "The Covina Citrus Peel," the official newsletter of the Covina Valley Historical Society, and is reproduced here with the permission of the author, Covina historian Glenn Reed.